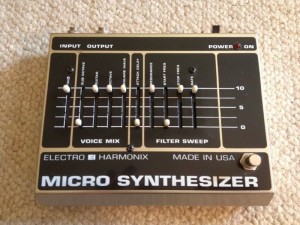 Electro Harmonix has a rich history, reputation and legacy of producing some of the most unique and distinct guitar effects. Also, they look as cool as they sound!

The Micro Synthesizer from EH is no exception. The effect pedal featured here is a re-issue of the original run from the 1970s and uses much of the same parts, components and circuitry of the first generation.

The Micro Synthesizer offers the guitarist a new palette of sounds to play with. Tones reminiscent of the sweeping analog sounds of the early Moogs are just a slider control away. Fat octaves, auto wah and volume swells are also possible and the combination of sounds and effects will keep you fascinated and exploring for hours.

The controls are arranged into 2 main groups, Voice Mix and Filter Sweep. Also available are controls for adjusting the attack delay and trigger sensitivity. 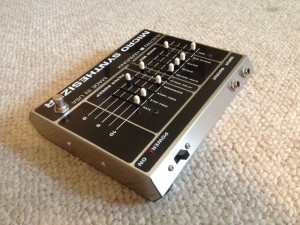 The unit is powered via AC adapter and has single 1/4″ jacks for input and (mono) output.

A master on/off switch is located on the back panel with a red LED light activated on power up. The effect is bypassed or activated by a foot switch located in the lower right corner of the unit.

We found this unit to operate very quietly and wouldn’t hesitate to include it in an effect chain or pedalboard. 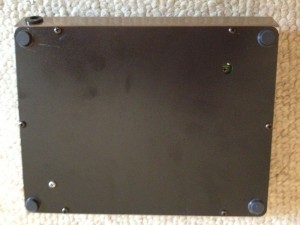 Another feature of the Micro Synth is the ability to adjust the unit’s sensitivity for different types of guitars and pickups. The original factory setting is optimized for single coil guitar pickups, but via an adjustment using a phillips screwdriver, can be optimized for guitars with humbucking pickups. Access to the control is located underneath the unit in the top right part of the bottom panel. Cool! 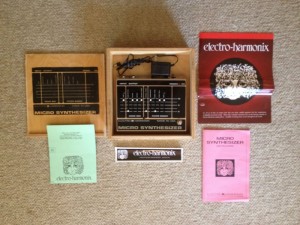 An original EH plywood box and a complete assortment of “case candy” complete with manual, sound charts and sticker make this particular effect complete and original as it was new.

Many consider this first re-issue of the EH Micro Synth to be superior in sound, sustain, attack and stability than the originals from the 1970s.

There is a new generation of EH Micro Synths available, but compared to the vibe and sounds we hear from the old school style, it’ll be hard to beat this version for coolness. 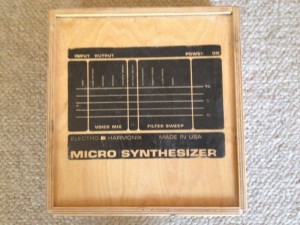